mama!milk is an instrumental duo
by a Japanese composer and accordion player Yuko Ikoma and a contrabass player Kosuke Shimizu,
based in the old city Kyoto, Japan.

They started to play with and perform in 1997.
After the first album was released in 1999, they have been composing, playing, and recording for their albums with a variety of ensembles.
The latest album is “Duologue” recorded in 2013.

mama!milk’s live performance is said “Cinematic Beauty” or “Japanese New Exotica”.
They has performed at art museum, gallery, theater, cafe, and unique venues like ruin, factory, temple, and even at Important Cultural Properties of Japan.
The performance is more site-specific and sensitive.
It’s changing between compositions and some improvisation for the place.
Maybe you feel like film without picture, or subtle fragrance of Japanese Noh in it.

*
Yuko Ikoma is a Japanese accordionists and composer.
She also composes for toy instrument like music box, automata, toy piano etc. and released some albums ( “esquisse”, “Erick-Satie by music-box”, “Suite for Fragile Chamber Orchestra” ) under the name yukoikoma.

*
Kosuke Shimizu is a Japanese contrabassist and composer.
He also plays for some projects like Takeo Toyama Emsemble, LABCRY, OK Music Ball etc.

mama!milk had recorded their compositions with a variety of ensembles from trio to tentet.
This is the first album by only accordion and contrabass in their career of 15 yeras.
You’ll feel more deeply the essence of their compositions and live performance.
It’s authentic mama!milk. 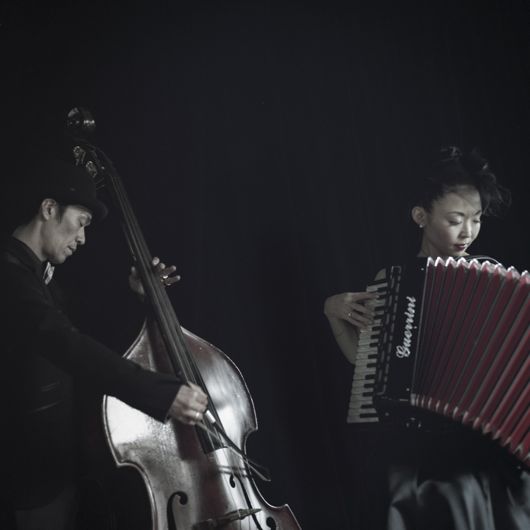 After thrilling jam session, they recorded this album at the small bookbinding factory in Tokyo. 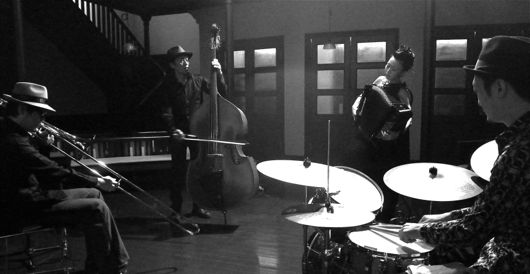 Yuko Ikoma composed “Quietude” for their concert at “Blue planet Sky” by James TURRELL in 21st Century Museum of Contemporary Art, Japan 2007.
It’s a site-specific suite for accordion, harmonics of contrabass, and all of the ambient sound.
This album is the one of variations of “Quietude” recorded at the ruin on the small quiet island 2008.

all compsitions written by Yuko Ikoma except ( * ) by J.S.Bach 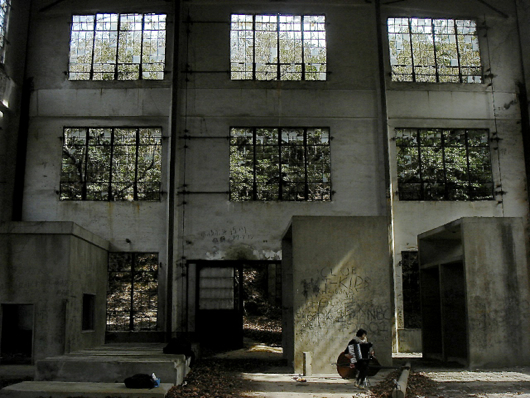 Quietude at a ruin photo by Kosuke Shimizu 2008 Japan

After rich 5 years with a lot of live performances and a variety of musical projects, mama!milk released “Fragrance of Notes” in 2008.
They played for one main microphone, and it was recorded by analog MTR.

all compsitions written by yuko ikoma except ( * ) by Kosuke Shimizu

When I met yuko the first time, it was in a hotel in tokyo
and having these little pieces of conversation in mind
and the even stronger impression of her elegant appearance makes this record very special for me.
It seems to bring back these pictures of a very short but intense moment
and i think the music of mama!milk has exactly this
it is changing between elegance,coolness but at the same time
the heart and the emotions of an intensive short moment
that will keep its footprint in your mind.
It leaves a lot of space for mindtrips
and also for connections in the own musical biographie.
during the listening while i was hearing the new mama!milk record
I was somehow found quotes in some europien countries
but at the same time it has this little difference that makes the music on
“fragrance of notes” outstanding for me.
At the end you will breath in and breath out
and you know that this record was not the last time in your cd-player.

Sound that stops the moment and makes you wonder

mama!milk is by accordion player Yuko Ikoma and ContrabassKosuke Shimizu,
they’re based in the old city Kyoto and has been doing a live at art museums, theater, cafe and even at a temple.
Their music are like a flame at the fireplace, burning quietly but not silently and burn the heart of people who listen to it.
It’s been a while since I have been facinated by their music.

Their new album 『Fragrance of Notes was released this summer after five years, the album is made with artists Tsutomu Kurihara (drums), Takeo Toyama (piano) and also Gak Sato (Theremin) who worked at Right Tempo for more than 10years, and also Yuichi Inobori (flute/trombone) as guest players.
The 14tracks or should I say 14piece of poems are like a picture scroll which will bring back some old and sweet memories.
It reminded me a film the romantic three piece made by movie director Seijun Suzuki, this album is a masterpiece.
The sexy and beautiful sound of accordion will cross by to the cool contrabass as if it is trying to seduce and other instruments were smiling to hear that eroticism in that sound and fit in as well.
Inner ecstasy comes out from that crossing and continues to stay regardless of time.
This album will become a sound track for me as we toward to autumn.

mama!milk has performed at art museum, gallery, theater, cafe, and
unique venue like ruin, factory, temple, and even at Important Cultural Properties of Japan.